Anyhow, Gary Busey plays the evil Millard Findlemeyer. He shoots some people in a cafe for no real reason. As one does.

He is later executed for his crimes; his ashes sent to his mother. One of his victims in the cafe, that didn’t die, works in a bakery. Bakerygirl is briefly annoyed over the lack of gingerbread seasoning, when there is a knock on the back door. Oh wonderful! Some completely random not creepy at all stranger in a cloak has dropped off some much needed gingerbread seasoning. 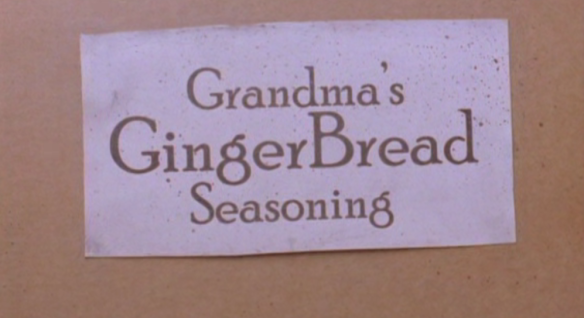 Bakerygirl doesn’t even think twice about using the mysterious seasoning. It isn’t anthrax or Gary Busey’s ashes, no. This leads me to conclude:

THIS BAKERY NEEDS TO BE SHUT DOWN BY THE HEALTH DEPARTMENT.

You don’t decorate a gingerbread man BEFORE baking!

Not only do they use the random seasoning, her bakery helper Wrestlingboy, bleeds into the dough. No one seems to notice or care. There are visible streaks of blood in the dough, but Bakerygirl continues to make the most terrible looking gingerbread man in existence. She decorates the cookie BEFORE baking. I think they deserve what is coming to them.

The making of Gingerdead Man is my favorite part of the movie. Everything else is filler. There is also a scene where another bakery worker has frosting boobs that is somewhat notable.

Mother of god help us.

This movie is not good.

Gingerdead Man is defeated when Wrestlingboy eats his head. I would have spit him out, seeing as how he is a freakishly gross looking, somehow alive cookie. But Wrestlingboy follows through and actually swallows the head. You have to admire his commitment. For SOME reason he doesn’t feel well after that.

Wait, he was raspberry flavored? That is just wrong.

Big surprise, the Gingerdead head causes Wrestlingboy to turn evil. His friends completely forget that he was ever a human. They shoot him several times with their magic never-run-out-of-bullets gun then shove him in the oven. I think he explodes.

Cut to the future, everything is great! Wait, some old woman left some cookies for the bake sale.

The eyes are kind of chewy. 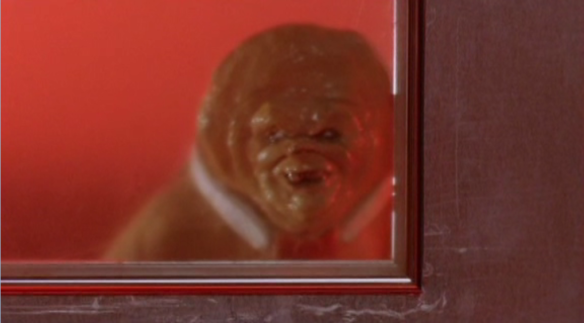 Wait…how many Gingerdead movies are there?!

Plot summary via Amazon: “A couple expecting a baby discover it’s a monster that kills when it’s scared.”

So long as it only kills when it is scared, I see no problem with this.

One of my main issues with this film is that it is poorly named. “It’s Alive!” implies that something not alive previously is now currently living. Or something you wouldn’t expect to be alive, such as a car or trash can, has turned into a living monster. But this commercial for the film has alleviated my concerns, with the tagline, “You see, there is only one thing wrong with the Davies baby. It’s Alive.”

Still. I think Fang Baby would have been a better title.

There are some really questionable wallpaper and clothing choices (I think the bright colors from the 60s dulled peoples eyes a bit, which led to the brown, puke, and orange color palette of the 70s). But in general, the acting isn’t terrible. Keep a lookout for the father’s strange and slightly disturbing impression of Walter Brennan. I only knew it was Walter Brennan because the closed captioning told me so. For a second I just thought he was demented.

The most WTF moment in the movie comes early on, as the father is sitting in the waiting room with several other fathers. Actual dialog from the film:

Crazy Father 1: You got something to stir the coffee with?

Crazy Father 2: (Hands him a pencil) Use that. I’ve been using it for the past three hours. After a while, you get used to the taste of lead in your coffee.

Crazy Environmentalist Father 3: There’s an overabundance of lead in all the things we eat nowadays. 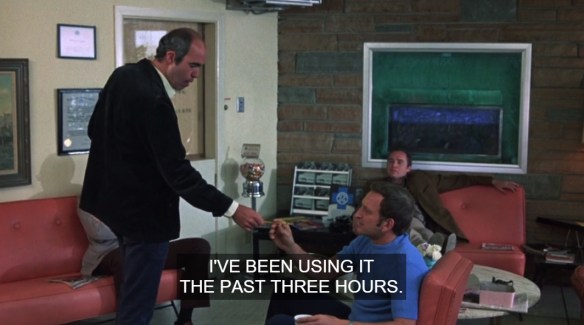 Then Father 1 goes on to stir his coffee with a pencil like it is no big deal, the one that Father 2 just said he had been using as a coffee stirrer for the past 3 hours. No one acknowledges that this is a completely insane thing to do. Here stranger! Take this dirty, slimy pencil and wiggle it around in the liquid you’re about to consume! Oh no problem! I’m glad I could help!

Then everyone acts as though the environmentalist father is the wacko for mentioning that lead is harmful. Never mind that pencils don’t actually contain lead. Whatever.

The environmentalist actually sets up the main premise of the film, that chemicals, medications, and pencil lead cause health issues in humans. Pencil stirrer father mentions that he is an exterminator. He explains that they just managed to make super cockroaches invulnerable to modern pesticides. But that is another movie.

Jump to the glorious Fang Baby being born. I was disappointed that he didn’t jump out and wave to the camera (like the lizard baby from V). But instead we get to see some nice birthing carnage. Birthing carnage is always welcome.

Minor issue during delivery, no problem.

Fang Baby escapes, of course, and there is some confusion around whether he will survive and whether he is animal or human.

Fang Baby’s Father: “You can’t classify it as an animal, doctor. It’s human. That’s what’s so disgusting to you.”

This seemed to be a sore point, so no one had the heart to tell Fang Baby Father that humans are animals.

About 90% of the film is just a search for Fang Baby. People, police, etc. just walking around looking under trash. YOU IN HERE FANG BABY? Okay, no. With some random people being unlucky and scaring Fang Baby into eating them. 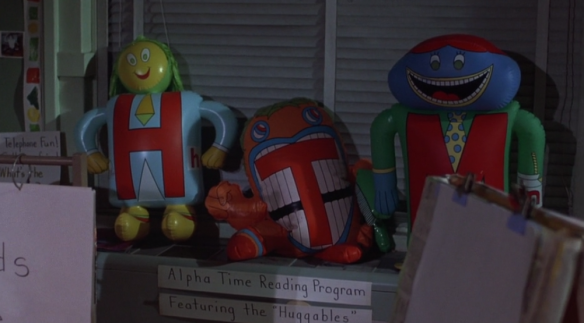 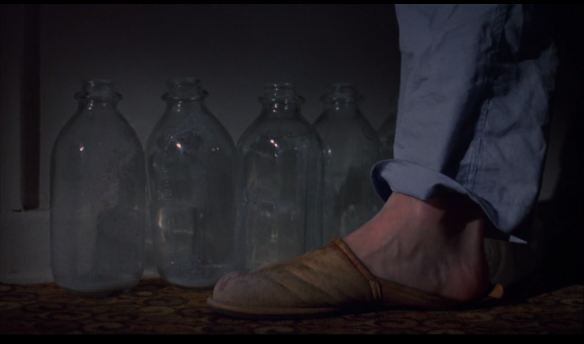 Empty milk bottles are a sure sign your house is infested with fang babies.

Fang Baby thinks he has struck gold when he wanders (slithers? We never get to see) into a milk truck. Clueless milkman gets in the way of Fang Baby’s LUST FOR MILK. So he must die. There was no other option.

The Fang Baby needs milk idea is reinforced by the double refrigerator scene. Was it normal in the 70s for a family of three (four if you count Fang Baby) to have two large brown refrigerators? I mean, they did have a cat too, but still. That seems excessive. When Fang Baby Father notices that the once fully-stocked fridges are now empty, he instantly knows Fang Baby is lurking nearby. Again, I’m disappointed that we never get to see Fang Baby drinking milk or eating frozen steaks. I really wanted this in my life. 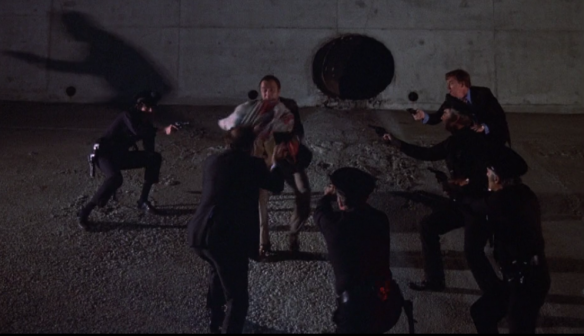 In fact, we really don’t get to see much of Fang Baby at all. Even when his father decides the best way to save poor Fang Baby (his cries were enough to make his father love him) is to chuck him  at the police. I’m serious, he literally threw Fang Baby at someone. That person died. I won’t spoil the dramatic ending for you. But, well, they might have shot Fang Baby a couple thousand times. Might have. But no problem, we are informed by the head detective that a Fang Baby has just been born in Seattle. Hooray! The End.

Rating: A+ for pencil stirrers, B- for Walter Brennan impressions, and D- for the lack of Fang Baby, our star and leader.

Fang Baby had so much potential. If only he had been given more screen time. 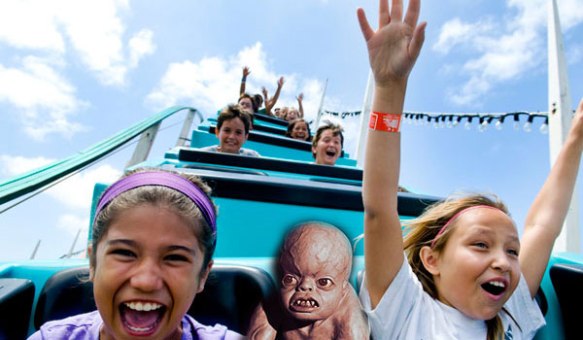 Milk supply issues are of the utmost importance.